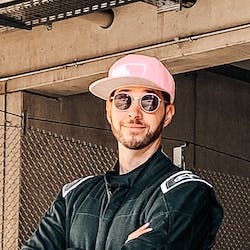 I'm Jure, a track day junkie, and a Porsche fanboy. Sign up below and I'll keep you up to day on all the cool European track days coming up, as well as useful track day driving tips!

Which lap timer should you buy?

I've gotten this question more times than I care to admit. The answer depends on the goals you want to accomplish with your lap timer and your budget.

Let's take a look at a few things to consider before we jump into my suggestions.

Knowing and improving your lap time

In my last email, I talked about the various goals you can have when doing a track day, but apart from having fun and exploring the limits of your car, it's great if you can measure how good you are.

Lap times are hard facts that we, drivers, oftentimes try to dismiss with innovative excuses such as "my tires were done", "I had traffic", "there was oil on track", etc. 🙈

Nonetheless, we should embrace them because acknowledging a bad lap time is the first step to working towards improving it.

In a future email, I'll talk about a few strategies I use to improve my lap times, but one thing that significantly helps with improving any driver's lap times is the ability to instantly see the time difference in real-time. That's called predictive lap time.

My suggestion would be to aim for a device that can record video as well because analyzing your driving is so much easier and faster if you have footage of what's happening with your car and your steering wheel inputs.

Your smartphone (& an app)

The most obvious and cheapest option is to use what you already have. With your smartphone, you're limited to its GPS/GLONASS connectivity and refresh rate.

There are quite a few apps that do the job but in my opinion, Harry's Lap Timer is the one to go for. It might look like it was written before smartphones existed, but it has all the features you need to record your lap time as well as your videos.

Another alternative that I've also tested (just the lap timing feature, not video recording) is Race Chrono. It works fine, is accurate, and similar to Harry's Lap Timer, it's got that 90s feel to it. 😅

If you hate the idea of having to constantly mount the phone, remove it between stints, and make sure "do not disturb" is on so you don't get a call in the middle of your fastest lap ... then the suggestion below might be worth considering.

I had the first version of the RaceBox for a few track days and I do have to say that it performed perfectly. The GPS connected instantly, both lap timing and predictive lap times were accurate, and the battery lasted for a couple of stints before it needed to be hooked up (but ideally you'd connect it to a 12V outlet anyway). The only reason I sold this and went for the Garmin Catalyst was that it didn't have the option to record video. You could record with a GoPro and export raw data from RaceBox and then use a 3rd party app (such as RaceRender) to stitch them up, but I was just too lazy.

Another reason I liked the RaceBox was that I could put it on the windscreen and it would just work™. Without fiddling with the phone, updating an app, dealing with wobbly phone holders ...

The original RaceBox has a 10hz refresh rate which is not top-notch but also accurate enough for hobby track day drivers.

The Mini is a new device from RaceBox with a whopping 25Hz refresh rate. The main difference between the Mini and the regular RaceBox is that the RaceBox is a standalone device with an LCD and the Mini is just a GPS module that greatly improves the accuracy of your smartphone.

That said, you'll still need a smartphone and a lap timer app (see first suggestion) to make this work.

My suggestion would be to just splurge for the regular RaceBox and enjoy driving without having to fiddle with your phone.

The Catalyst is the lap timer I currently use. It currently costs just under a grand and in my opinion is the best all-in-one lap timer you can currently get. The display is crisp, the UI is intuitive enough and Garmin even markets it as a "coach". I haven't used this feature a lot because I usually know when and where I messed up, but if you're a novice trying to find your way around the track, it will help you with useful tips!

Yes, it has its drawbacks which are:

I have to be honest with you - the RN One lap timer is super popular on the Nürburgring, especially amongst Porsche drivers. I've never tested it personally but I was about to buy it at least half a dozen times in the past. The reason I never pulled the trigger was that the integrated cameras are not full HD and it only has 64 GB of memory. Think about that. 720p cameras and 64GB of memory in 2023.

They do offer a way to add a full HD camera, but as a third camera that you plug in. I don't want to imagine how quickly 64 GBs run out with all that data being recorded.

Of course, you can buy the RN Pro Trackday Bundle which will currently set you back €4,314.00 for a full-HD option with 128 GB of storage. 🤯

Racelogic is one of the biggest makers of professional lap timing and video logging equipment out there. That said, I've found that their entry-level products just don't justify the price. I've had the VBox Sport lap timer and it was a pain in the rear to set it up, it took forever to find the signal, etc ... I'd recommend Racelogic if you're looking to equip a race car with proper data & video logging hardware, but would stay away if you're just a hobby track day driver, because other solutions provide a much bigger bang for the buck.

If you're a newbie driver and just want to know how fast you are, use your smartphone with either Harry's Lap Timer or RaceChrono. If you hate the idea of having to use your phone that can get super hot during your stints, go for the original RaceBox lap timer which provides a screen and an external GPS antenna. It just works!

If you want a full all-in-one solution, go for the Garmin Catalyst that can act as a coach too (especially if you're a novice).

However, if money is no object and you want to flash that RaceNavigator swag on track days, go all in and get the RN Pro bundle and enjoy one of the best and most reliable solutions out there.

You might've already seen this but this is an insanely fast lap around the Ring in a GT3 RS with Kuba Giermaziak. He is using all the track and then some. Maybe he's so fast because of the RaceNavigator? 😅

PS: I didn't mention Porsche's Track Precision app, but if you have a newer Porsche and the ability to use that, it's a really good alternative to external devices.

I'm Jure, a track day junkie, and a Porsche fanboy. Sign up below and I'll keep you up to day on all the cool European track days coming up, as well as useful track day driving tips!